No courtesy, no courtship (and no courtyards) 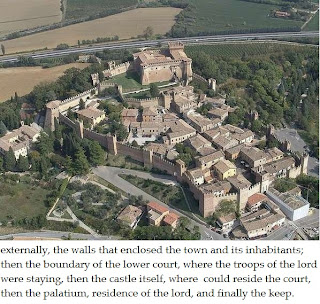 The medieval court was the household of a monarch, or an important nobleman, the place where he used to live and carry out its functions of control over territory. In large courts many thousands of people (namely the courtesans) were living: officials, servants, as well as others in hope of political or financial gain, and even jesters and musicians. As well as being the centre of political life, courts were usually the centre of fashion, literature, music and art. Courtesy today merely refers to good manners and polite behaviors, but in medieval times it was the attribute that characterized the virtuous nobility, basing on the code of conduct of the chivalry, and referring primarily to honesty, loyalty, generosity, and humility. In the beginning courtesy had nothing to do with behaviors toward women or with what we call good manners, while at today we say "be a cavalier" meaning "be a gentleman". Courtesy distinguishes a refined behavior from what is rude and vulgar: “To be courteous means to behave as if one were at court, to be courtly. […] Originally, courtesy meant the special consideration one knight showed to another. For example, a knight should always give his noble opponent an even chance, never attacking one who was unarmed.” (E.L. Skip Knox[1]). 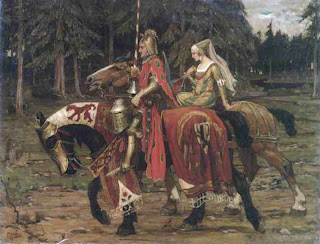 During the Renaissance courtesy was the main attribute of the perfect courtier, who was example of virtuous civilization and possessed good judgment, discretion, generosity, prudence, honesty, measurement, and above all grace and nonchalance. Knight was the one who possessed these qualities, not only pretending to have these qualities (courtier now has a negative value, indicating someone who is fake). The knight was not expected to give favors to others around him; he was expected to behave accordingly to a noble code, respecting higher ideals. He was not supposed to be "kind" to others; he was not expected to be "polite": he was expected to respect and cultivate a moral order. I wouldn't say that the knight was somehow in relation to the Other, after all he was referring to a rather normative code; but this dispositive was probably preserving the dimension of the speech, introducing a third element who could break the specular representation, the duality, interposing something between “I” and the “other”. 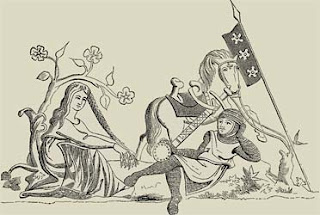 This is something we can see also in the courtly love, where the lover functioned well as semblant, sort of fictional lover (fictional because everything was played within a strict set of rules, which in most cases did not led to an intercourse) whose function was to allow the man to sing the Love. Courts were present in most of societies, but only in southern France and Italy it has led to develop such culture, which was later spread to the entire West. it was something that was never developed in China, where courts were regulated by other mechanisms, such  that courtesy is of a difficult translation. To some westerners some habits of Hong Kong people may seem rude. Of course, it is not simply that Chinese culture lack of regulating what is polite and what is rude, what is respectful and what is offensive; quite on the contrary, in Chinese culture there is often the concern to not bother the other, to not disturb. But much concern is given to the other, while too little attention is given to the word; the relation with the Other seems to be neglected. This is well- documented by an article titled “Courtesy in Hong Kong: Manners and Etiquette”[2]:
“Many travel guides written about Hong Kong during the 1980s and 1990s had remarked on the rudeness of Hongkongers. While understandable, courtesy in the city has improved dramatically in recent years. And these days, Hong Kong consistently ranks highly among Asian cities when it comes to customer service. Sometimes, there could be crowds of people pushing and shoving and neglecting to say "please" or "sorry". It is unusual for someone to hold doors for strangers. Don't expect the supermarket or bank cashier to ask about your day or to make chit-chat. In non-tourist areas, staff in shops and restaurant might not even say "thank you" when you pay. However, don't take this personally. This apparent 'rudeness' is not menacing or mean-spirited. Hong Kong is a fast-paced society where people often neglect pleasantries for efficiency. It does not originate from an abundance of aggression or the desire to offend. If anything, Hongkongers usually go out of their way not to offend. For example, you will rarely hear people debate politics in public or confront strangers on their conduct. They want to go merrily and speedily on their way with the fewest obstacles. It is generally considered strange to strike up pleasantries with a stranger, or to thank a bus driver. Saying "good morning" to a person you don't know at a bus stop will probably be viewed with some apprehension.
Hong Kong is not a touchy-feely kind of place, but times are changing. In the last decade, perhaps due to increased tourism and international trade, courtesy in Hong Kong has changed dramatically. Now, when you enter a department, convenience or chain clothing stores, staff will greet and thank you for your patronage or visit, even if you haven't bought anything. Wherever tourists or Western people congregate, you can expect courtesy meeting Western expectations.” 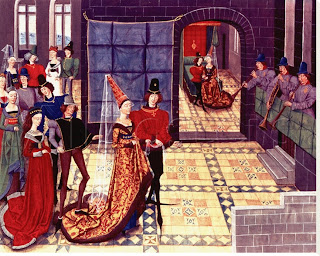 I quite agree with this picture. What I further argue is that Hong Kong has not developed any courtesy, while it has probably developed a sense of politeness. It is then not surprising that Hong Kong is well known for its level of customer service; Hong Kong people can be extremely polite and respectful, probably more than westerners, but there is a big difference between courtesy and politeness. One difference between courtesy and politeness is that the former involves an attention to the dimension of the word, to the language, while the latter refers to a code (elegance), where the word is taken as a sign. Courtesy requires an ethical and intellectual dimension; the feeling can be “honest” or “fake” (this is the opposite meaning that courtesy has taken through the years), but in both cases it cannot avoid the question of the word (la parole), in both cases it means that the unconscious is at work, the question of the Other is not neglected; on the other hand, politeness is a favor given to the other, it is an obligation, nothing more, the issue of the word is excluded. 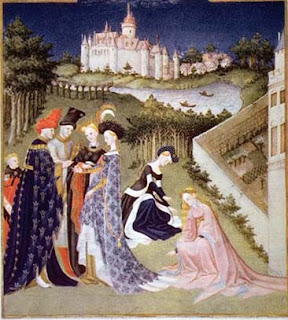 Again, what makes the difference is the centrality given to the word. I find it interesting that the article claims in Hong Kong “people neglect pleasantries for efficiency”, and I argue that it is not by chance that what is constantly neglected is the dimension of the speech. This is a first difference: speaking is considered a pleasantry, kind of a surplus, and not something essential; it is even an “obstacle”, a waste of time. Of course, we know that the time-saving explanation is first of all a good excuse; nowadays many places have a fast-pace life, so why elsewhere people do not give up on courtesies? I claim that the reason lies in the way we consider the word and the human relations. For example, we can see how people make business worldwide, in South America, in India or North Africa. In all these places the bargain takes a longer time and involves the ability of establishing a good relation with the other in the first place. We can see clearly that bargaining means much more than just making a deal: the best rhetorical and interpersonal skills are required, the Other is at work. The business then comes as a consequence of the conversation, depending by the relationship established. Usually a lack of time, a lack of interest, or a lack of desire will lead to  an unsatisfactory deal. This is quite different from how businesses are conducted in Hong Kong. What is the logic undergoing the way people do business? This is also tied to the question of the word, which found one of its best expressions in the (street) market. I would say that politeness is the attention given to the other, while courtesy is the attention given to the word, to the speech (then to the conversation, to the relation). Courtesy will lead to taking care of the moment we do business, so that at the end of the deal both persons involved will be satisfied of the deal. Politeness, on the other hand, will not add value to the deal, and the same deal will probably result less satisfactory. 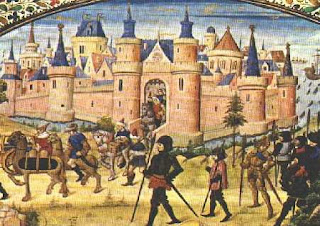 Some attempts of being polite at any cost can even turn out to be ridiculous. When you enter a department store or a big restaurant the staff will greet you and thank you for your visit, even if you haven't bought anything. But this is the point: no attention is given to the relation; words are repeated mechanically, to anyone indistinctly. Some employer standing at the entrance for hours will be greeting and repeating the same sentences to everyone who is entering or leaving. This probably because someone has learned that greeting is a “good manner”, but if this is intended to be part of the customer care, the consequence is that it might soon become annoying. 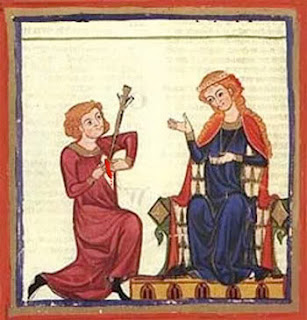 And what can we say about the attitude towards love and relationships in Hong Kong? Courtship was not born here. Courtship, which still refers to the medieval courts, was a particular way of using the word to address the object of love (a style which has been lately named “courtly love”). The troubadour spoke of the physical beauty of their ladies, as the feelings and desires the ladies rouse in them, such that scholars cannot determine how erotic or how platonic courtly love was. And so were the way the knights express their love for their lovers. This gives us an idea of the continuous tentative of posing the word at first, even though an abuse of certain rhetoric has later lead to some stereotypical repetition and rather empty, arid words. But what can we say about the courtship in Hong Kong? Does it happen through words? Or isn’t Hong Kong more oriented toward its modern, quicker, task oriented version: the dating? Can we say that there is much invention, or poetry in the way people build love relationships in Hong Kong? Can we say much space is really given to romance in Hong Kong, or isn’t the city rather split between the so called “serious” relationships and its opposite “one night stand” (an apparent opposition which should deserve further investigation)?
I would point out that the same word "romance", which comes from the old French romanz, began life as the name for a narrative poem about chivalric heroes (only by 1660s was the term applied to the distinctive  love relationship commonly featured in such poems). How is the romance translated in Chinese?
Ah, Hong Kong also lacks of courtyards (not surprisingly), but this is of minor importance…
[1] http://boisestate.edu/courses/westciv/medsoc/11.shtml
[2] http://iguide.travel/Hong_Kong/Courtesy/Manners_and_Etiquette