Laughing as the most noble and intellectual activity

Laugh is normally intended just as a “liberating” act. While the common sense and the dominating discourse invites us to “be serious”, laughing is something to be confined to the private (rarely in public, and just under very particular circumstances; or, and this sounds like a paradox, when the public is included by the private, I will say like this). The common sense considers laughing as something trivial, and at best something with a very marginal relevance. Apparently, indeed, laughing is not a faculty that we can measure, or that we can say we can “make use of it”. According to any imaginary criteria of “usefulness” laughing is of no use. 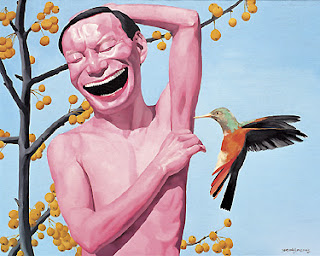 Laughing indicates precisely a subversion of the knowledge, a disruption in the discourse: another scene appears; the original sense is fading; the representation is disrupting, re-vealing Other behind.
Laughing is a sign of sexuality, it is a sign of a radical difference.

Some might say that imagination is needed for laughing. What a paradox then. But laughing, indeed, is the image taken at the extreme; it is what goes behind the image. Laughing is playing with the images and the imaginary. When we say that the signifier (the speech) comes first, we say precisely that the image is first of all acoustic, meaning a product of the speech. We can find a fixation of the image (a fantasy that is always the same, for example), but there is no image that can last forever. This is what the functioning of irony shows. 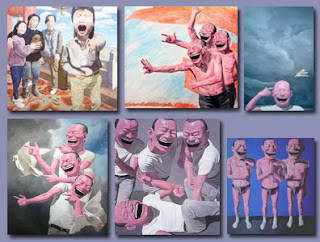 We have different ways for producing laugh. For example:

Ridiculous: what causes the laugh by being awkward, strange, grotesque or silly
Humor: ingenious way of seeing, interpreting and presenting the reality, highlighting aspects that are unusual, quirky and fun.
Sarcasm: discourse of derision, harsh mockery, caustic, bitter.
Hoax: making fun of someone; jeering at someone, but not as sign of disrespect.
Satire: witty and bitter criticism of the vices, prejudices, weaknesses and human passions.
Caricature: exaggeration of the defects and imperfections of a person, or a situation.
Parody: when a person or action that would imitate another, more noble and worthy, end up resulting instead only a mockery, a poor imitation; also, comic disguise of a composition or serious content. 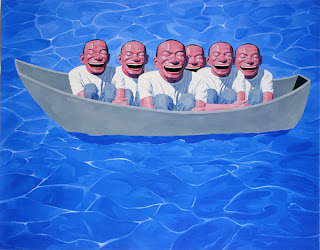 And we have different ways for representing the world, for writing a story:

Comedy: humorous or satirical in tone and that usually contains a happy resolution of the thematic conflict. Often farcical; the main character might initially not being able to articulate any question, and is constantly mocked by fate, which produces a comic effect. The happy ending usually shows, solves all the misunderstanding and miscomprehensions that sustained the story. Nothing is as it seems.
Drama: "painful affair." Present as great, noisy, even spectacular events. It is normally intended as a serious work. It aims at representing conflicts, and the emotions of the characters (the affects). Prevalence is given to the image, rather than the speech.
Tragedy: narrative of a serious and tragic dissolution of the plot. Unhappy ending: the fears and representations are confirmed. There is a downfall of the character, who surrenders the destiny, the fate. The story never change, there is no room for a different ending.
Each of these representations produces effects through some laughing strategies: 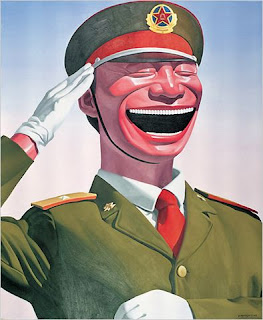 Comedy leads to ridicule through the caricature.
Drama highlights the ridiculous through the satire (which has a veil of sadness. It's the bitter confirmation of reality. It indicates a substantial acceptation of things).
Tragedy is the fixation of the image. Interestingly enough tragedy is the maximum of seriousness. A serious problem generally refers to some tragedy, to something heavy, to something that cannot be changed, something that cannot be repeated. Serious and serial: taken in a series. Tragedy can only turn to comedy through an exaggeration, only through parody. 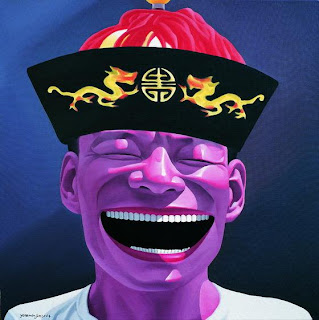 However, I claim that we call irony is something different, and gives rise to something radically different, something beyond a definable genre of representation. Irony is precisely the eruption of the new over the scene: it is the surprise. The irony of fate occurs on a different register from each of the three above mentioned forms. Some time ago, I argued that through psychoanalysis is possible to shift from tragedy to drama to comedy. I want to add a passage more, and I suggest that when there is openness to the Other, when there's semblant, when there is a dispositif that works, when there is speech, and when there is intelligence, there it is possible to have a radical subversion of the so called reality. There miracles (not in religious meaning) and coincidences occur. 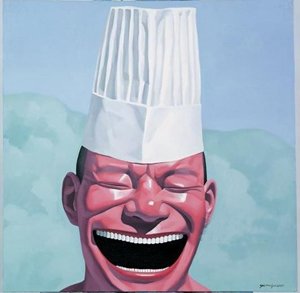 When odd things happen some might say that it is just the “comedy of life”. But to some extent I think that comedy, drama and tragedy are all representations of the world, just with different degrees. They all represent the world, as if the image came first. Even in the case of drama, can we really say that the imaginary is being dissolved and the “happy ending” is the prevalence of the dimension of the speech? Hard to say, it can also be the confirmation of another image, and as such the substitution of a Story with another Story; not something radical, in the end. There is no function of “telling”, there is no openness: just another Story. A bit like psychotherapy: a (supposed) better or more functional story, instead of the previous one (supposed) maladaptive, and painful.

But it is only the irony that states the primacy of the speech over the image, and indeed is able to produce a subversion of reality. (The effect of irony is radical. It is not simply a making fun of the so called reality. It is precisely its disruption. For instance, humor only produces a bitter laugh, with gritted teeth, while irony instead can produce very loud laugh)