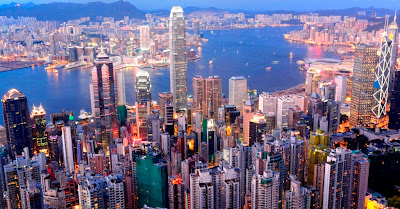 The baby receives his image by the mirror. A mirror that, far from simply reflecting an image, literally creates the image. The image that the baby is receiving is what gives the imaginary sense of unity that will constitutes the imaginary I. The image seen by the baby is an image supposed to be already there, while indeed it exists only and first of all in the mirror. Inside or outside, who’s seeing what? Who comes first, the baby or his image?
When I first arrived to Hong Kong I felt like I have lost all my coordinates. I started observing and noting all those phenomena that were so far from my understanding. I started reading a lot, trying to question the grounds for my cultural shock. Soon I noticed that most of the western literature about Chinese culture is absolutely biased and misleading. Usually the westerners have interpreted China through the western philosophical categories and western terminology (the very idea of an “orient” is most likely a western idea). As a consequence, China is often interpreted in terms of “lack”, in terms of “more” or “less”, compared to what are supposed to be the universal standards. Such interpretation of China is not just wrong, and misleading: while it aims at describing China, what happens instead it that it reveals the limits of the western discourse itself. If we are aware of this, it can also become a chance for us. 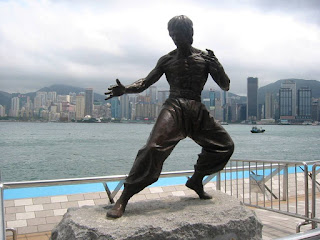 So, the mirror is not just neutral. It does not simply reflect the picture of the “real” object. (by the way, the metaphor of the mirror was used at first by Freud; but what Strachey has been translated into English with neutrality was the German word indifferenz, which sounds slightly different). So, such interpretation of China leads to the creation of an imaginary China, a fictional place that doesn’t exist anywhere. And in fact we can say that nothing exists in the image, meaning that nothing really exists before the speech. Just naming things, things become. (think for example at the very recognition of the image at the mirror: can we really say that this goes without the speech? Are we saying that it goes out of the language?). 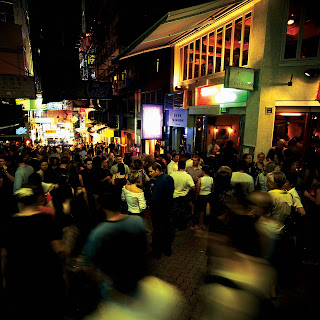 Coming to Hong Kong I thought that I could finally meet some locals who could give me a more “Chinese” version of China; I thought that being here and talking to local people I could get a better access to the true Hong Kong and China, meaning a version not mediated by the western conceptual system. But to my surprise, I have found that most of the local intellectuals, scholars, and students, are formed on western books, on western ideas, and they already have a western conception of the Chinese world. As to say: they have an image of China as it is reflected by the mirror of the West! (I think this is what we call Westernization). So, what is surprising to me, is that this sort of original image does not exist anywhere. Again: the image in the mirror is a creation ex nihilo, out of nothing. It is not simply a reflection, maybe inverted; it is not the negative, nor is a distortion of the original. Because originary is the speech, and not the image! 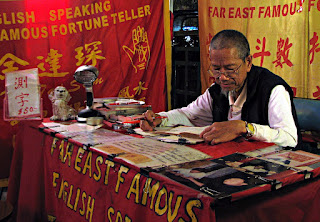 I think that we can see such phenomena easily in Hong Kong. Even though Hong Kong people are quintessentially Chinese, the city is pretty much oriented to adopt ideals coming from the external, from the US and Japan for example. (which is curios, as I thought I was a “westerner”, before I came to Hong Kong. But then I realized that when speaking of “West”, generally Hong Kong people think to US).
Chinese culture is probably the most ancient in the world, but it has always been somehow closed to the external influence. Now the attitude has apparently changed, but in a way that seems to assume literally the ideals founding the western discourse (capitalism, results, happiness, etc..) and the image offered by the West. (Hong Kong has a different story, but still, it was a colony for long time, so a certain discourse, and a certain image have been somehow imposed, in a relation that was asymmetrical). How does the West work as a mirror for Hong Kong, and for China? What can we say about this process of identification to the image? And how this identification leads at the same time to the alienation? 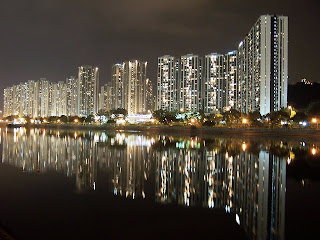 Hong Kong at the mirror
At the risk of being pedantic, scholastic, I would like to trace briefly a distinction between the ideal-ego and the ego-ideal. I would summarize like this[1]:
Ideal-ego: it is the unifying image offered by the mirror, what arises during the Mirror stage. It is basically only imaginary. It is what the other loves, and as such it sets the ideal that the “subject” tends to reach.
Ego-ideal: it is given by the identification with the others, for example with the parents, friends, etc…It is imaginary, but also symbolic, in the way it gives the “subject” a place in the discourse. So it is also tied to language. It is given by the identification to values, to a culture. This happens within groups, within society, and it aims at providing cohesion among individuals. Then, even though we speak of “ego”, the ego-ideal has a deep collective dimension, not just individual. The ego-ideal is very strong and demanding, because it requires adaptation and a certain level of conformism. 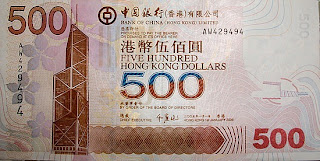 I consider the tension between these two dimension very important when talking about Hong Kong. Hong Kong is often described as the city where East and West meet, but I consider this stereotype quite misleading. On the contrary, I would say that Hong Kong is more westernized than the West, and more Chinese than China. It is westernized (or most likely Americanized) in the way it ideally assumes and exacerbates the ideals founding the western discourse: technique and technology, capitalism, happiness, results, efficiency, fast-paced life. At the same time it remained very traditional because it did not know the Cultural Revolution and has maintained very traditional Chinese values, structure of social relationships, family organization, attitude to speaking, and relations between genders. 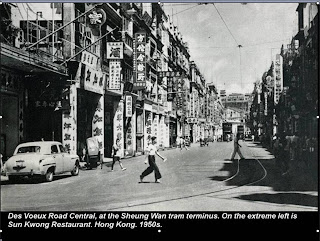 It is a matter of fact that Hongkongers hardly recognize themselves as “Chinese” (http://hkupop.hku.hk/english/release/release884.html), meaning being part of Mainland China. Hongkonghers and Mainlanders are just two separate groups. In last days particularly, we assisted to mutual attacks from the two sides (this video being the most popular: http://www.youtube.com/watch?v=_nUkiaDS3g4). It is interesting, because Hong Kong identity was set only recently, end of the ’60 I would say (see: A modern history of Hong Kong, Donald Tsang), and actually the great majority of Hongkongers are descendant by people from Mainland (now arguably at the 3-4th generation in Hong Kong). It is a process common worldwide, also in Italy there is something similar: the sons of the migrants are always quite harsh toward the place of origins of their families. But Hong Kong has always maintained close relations with Mainland, good commercial relations. But now it seems that something is broken, it seems that an identification is no longer possible. Suddenly the picture in the mirror turned into the uncanny. 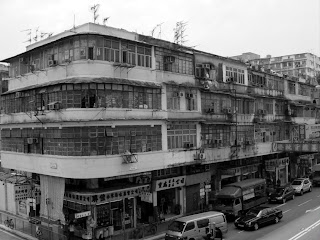 A couple of months ago I was watching a demonstration against the Chinese Communist Party. I was in Nathan road (one of the main streets in Kowloon side). The demonstration was a huge column of people with banners against the CCP. I remember one in particular, that was saying: “The Chinese Communist Party ruins tradition”. I find this particularly relevant. The hongkongers believe to be the depositary of the tradition, and of the “real” Chinese culture and values. Values and culture that, on the contrary, would have been betrayed by Mainland. Whatever this it true or not, what matter for us is that obviously, at this level no identification is possible. The ego-ideal no longer works, because there are no more values being shared, there is no more sense of proximity. For Hong Kong is probably like this since few years already (just before Hong Kong returned to Mainland, in 1997, some hundred thousands of people flew away for fear of the reunification), but before it was enough to turn the head somewhere else, to the West for example. Mainland is obviously not offering the ideal that everybody can recognize, and it is far from being perceived as the place of perfection. 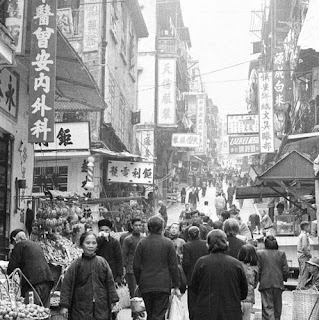 The ego-ideal for Hong Kong is provided by the sense of identity of being Hongkonghese, rather than Chinese. At the same time Hong Kong finds his mirror in the West, where it finds the image of what is considered good (good manners, good values, acceptable goals for life, etc…), and that is the place where it builds its ideal-ego, and where it tends too. And it takes such ideal so seriously, so literally that probably it exacerbates such values, more than West itself. Thought my (mi)reading of the mirror stage applied to Hong Kong is probably quite naïve, and it should be taken as a telling, nothing more than a pre-text for speaking of Other, still I consider this tension between the ideal-ego (the process of westernization) and the ego-ideal (the tradition, the values) quite fitting Hong Kong. 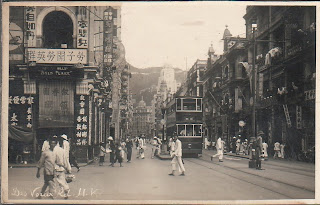 The identification to the image is the identification to the phrase, to the statement, and as such is not something that we can hope for. Probably the chance for Hong Kong is that the image of the ideal-ego and the ego-ideal are not coinciding, but more important is a (mis)recognition of any image, what could happen meeting the uncanny, for example.
[1] For references: A Compendium of Lacanian Terms, Edited by Huguette Glowinski, Zita M. Marks and Sara Murphy, Free Associations Books, 2001, London
Posted by Diego Busiol at 02:03